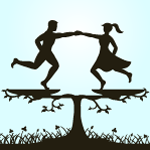 Saathiya is going to celebrate 26th Aug as Women's Equality Day—a celebration of the hard-fought struggle for women's suffrage that was won in 1918. Today, almost 100 years later, women have made many gains in the struggle for equality.

Almost 100 years later, the struggle for full equality continues. There is much that has not been won. In 2015, women are still paid less than men for equal work; Latina women are paid 55 percent of what men earn, Black women 67 percent and white women 78 percent. Worldwide, 35 percent of women experience sexual violence. Society then sweeps sexual violence under the rug—shaming victims and protecting attackers.

Women's bodies belong to no one but themselves. We should have the right to control our own bodies, and determine how and when we get pregnant and give birth. Access to abortion and birth control are part and parcel of reproductive health care—and shouldn't be isolated from health care in general. Likewise, women look forward to the day when we are safe to walk down the street, and when our bodies are not objectified and commodified. We are struggling for a day when we are not paid less just because of our gender or more likely to live in poverty because of it.

That day is entirely possible but is only possible if we organize and mobilize to challenge the status quo that perpetuates and institutionalizes inequality. Join WORD in building the struggle for full equality.